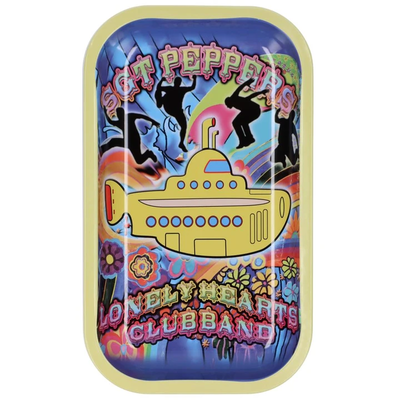 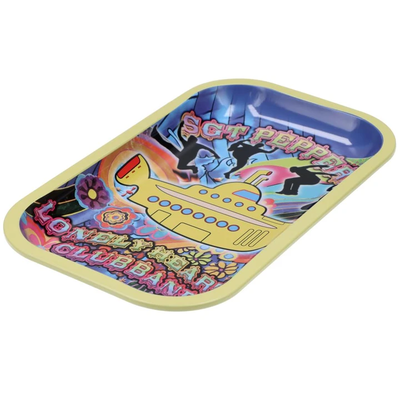 The Fab 4 formed at the end of the 1950’s in Liverpool. Credited with starting the British Invasion in the USA they are hailed as the most influential band of all time. In 1988 they were inducted into the Rock & Roll hall of fame and are regarded as the best-selling band of all time. Although only 2 members remain, the impact they had will be forever remembered as they’ve secured their places as rock legends.

The Yellow Submarine rolling tray lets you roll with ease. Keep all your accessories in one place with this aluminum tray. This medium size tray measures 27x16cm/10.6x6.3” so it’s perfect for sweet sessions at home or bringing with you on the go. Yellow Submarine has a non-stick surface so all your favourite stuff doesn’t get stuck to it. The edges are rounded to prevent losing herbs in the nooks and crannies.

Yellow Submarine is a yellow and blue rolling tray. It features the iconic yellow submarine surrounded by dancing, flowers and rainbows. The swirls of color are background for the text Sgt Peppers Lonely Hearts Club Band.